Thursday 24th of  May 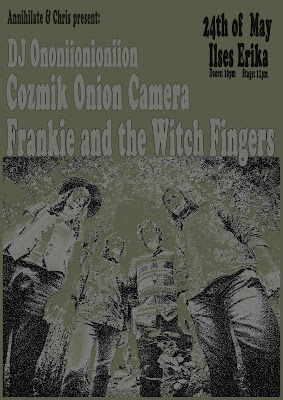 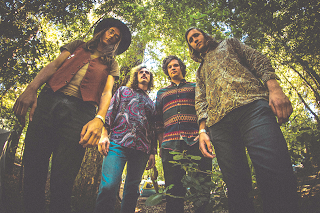 West Coast screamers Frankie and the Witch Fingers trade on a tradition built up from the very fabric of psychedelic soul. Shot through with the same melted juke jitters that sent Doug Sahm, The 13th Floor Elevators and The Pretty Things scratching through the record needles of every child indebted to the vibrational cathedral, the L.A. crew comes barreling into 2017 with their own brand of heatstroke mojo. The band’s latest, Brain Telephone, is an acid bath for the soul delivered in pulsating waves via fuzz guitar. It’s an electric jolt to the endocrine system, shaking the last dregs of reluctance out of your system and inducing bouts of dance euphoria.

The band, C. Dylan Sizemore (vocalist, guitarist, and songwriter), Glenn Brigman (drums, organ), Alex Bulli (bass), and Josh Menashe (lead guitar and backing vocals), has spent the past few years crawling around the heat-swamped corners of L.A.’s sweatbox circuit, honing the gospel across 2013’s Sidewalk, 2015’s eponymous album, and pumping straight motor oil through the veins of last year’s neon meltdown, Heavy Roller. They took the circus on the road, pounding every last inch of varnish from their weary husks from the heartland to the Bay. They’re thrumming on a new vibration that’s found it’s way to them on a light beam ripped into their deepest subconscious. They’re hooked up to the Brain Telephone that’s opened through the switchboard in their soul and they’re dropping you the digits to dial in.

They’ve tapped into something primal and it’s beating quick and frothy in the veins, combining the levitation-laced vibrations of Spacemen 3 with a scarred guitar growl straight out of the Motor City’s storied rock lineage. Brain Telephone is bent through the prism of shake n’ shimmy ­– a sweat-drenched dance party that’s equal parts Northern Soul all-nighter, Monterey Pop implosion, and modern warehouse wall-dripper all in one. That’s not to say they don’t know how to get tender, though. For all their eight-piston pummel, they can bring it down to a spine-tingling simmer when the time comes. At its heart, Brain Telephone is Frankie and The Witch Fingers at their most visceral – primed, polished, and funneling the fragrant heat of rock through your cranked speakers.
- Andy French - Raven Sings The Blues