Tuesday 15th of  May 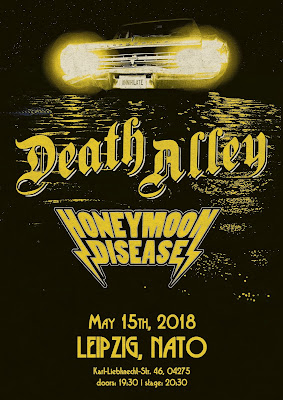 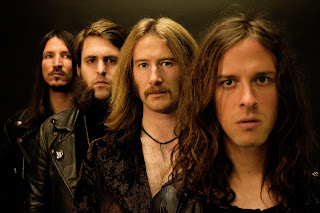 Formed in Amsterdam in 2013, Death Alley is a rare mix of punk attitude and diligent, musical precision. As crossover as it gets while still keeping focus – the fourpiece holds King Crimson as close to their hearts as The Stooges; Hawkwind and Poison Idea are loved in equal measure; the acid flows, but this ain't no hippie band. Fueling this relentless machine of seeming contradictions is a pure love for great music, and a restless thirst for the deep end of the pool. No risk? No reward. First you acknowledge that coil around your neck, then you shake it off. 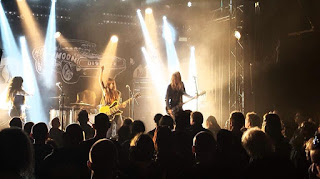 Honeymoon Disease is a speedy rock’n’roll quartet from Gothenburg, Sweden. With flaming guitar riffs, sweaty 70’s grooves and heavy action stage performances, this band will give you a colorful punch right in the face – A glowing black eye with a taste
of bands like Thin Lizzy, The Hellacopters and Kiss. Honeymoon Disease was formed 2014 and after releasing the debut album “The Transcendence” (Napalm Records) they've been a fast growing live act on the European rock stages – touring and supporting bands like Imperial State Electric, Graveyard, The Shrine, RavenEye, Bombus and The Vintage Caravan. The band's second album “Part Human, Mostly Beast” will be unleashed on October 27th (2017) via The Sign Records. A 12-track high voltage rock record spiced with powerful and groovy soul. The two singles “Doin' it Agan” and “Four Stroke Woman” was released this summer, which is a first taste of the upcoming album that holds a rough and more lively sound that captures the band's sweaty and intense feeling on stage.