The Berlin band is rightly compared with icons of seventies Krautrock such as Neu! and La Düsseldorf, with a tight and driving sound, yet they are still somehow unpredictable. Hardly
any other band understands how to mutate tiny musical nuances into volcanic eruptions like they do. Camera is a motor running at full throttle, where an explosion could occur at any second. Once you have embarked on this crazy journey, you will be fascinated by the alternating current somewhere between a flash flood and roller coaster running off the rails. The cascades of sound convey a blurry image of a boundless desire to revolt, with each blink of an eye threatening to end in purgatory, yet it is damned near indestructible. 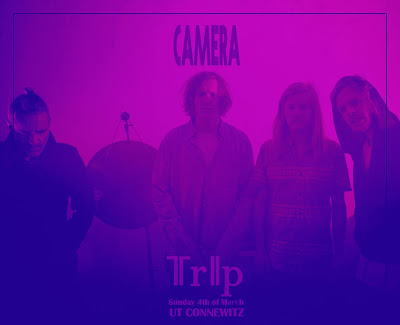 Mamuthones is the project of Alessio Gastaldello, founder and ex drummer of Jennifer Gentle, Italy’s psych pop mavericks currently signed to Sub Pop Records. After leaving the band in 2007, Alessio, helped by different musicians, put out several albums under the Mamuthones moniker for Italian avant-garde labels like A Silent Place and Boring Machines.
The lineup of the band is now featured by Matteo Polato (guitar) and Francesco Lovision (synth) from the Italian band Slumberwood and the drummer Andrea Davì, eclettic musician involved in different band (The Beautiful Bunker and Lay Llamas) and project (from contemporary music to jazz).
66 years old drummer Maurizio Boldrin, a local legend who since the Sixties has played in countless beat and prog groups including Pino Donaggio’s band (yes, the same Donaggio who wrote “You don’t have to say you love me” and soundtracked multiple Brian De Palma, Nicholas Roeg and Joe Dante movies) left the band in early 2015.
The new album is part of the Collisions series, this is #4, of the English label Rocket Recordings (Goat, Teeth of the sea, Gnod, Lay Llamas…) and is a split album with Evil Blizzard.
The new songs are possessed of an upbeat and effervescent sound equally damaged by the dark alchemy of early Can, the sci-fi swagger of Chrome and the magpie spirit of Eno and Byrne’s ‘My Life In The Bush With Ghosts’.
Collisions 04 explores the ying and yang of an approach whereby overt post-punk and psychedelic influences meld with with esoteric vibrations and irreverent attitude, challenging bands, listener, and label alike in an intimidating and invigorating assault on the senses.
Evil Blizzard and Mamuthones make for formidable opponents, in a demolition derby where the result is victory for all. The Rocket Recordings Collisions series has thus far seen luminaries like The Heads, White Hills, Oneida, Mugstar, Shit & Shine and Gnod locking horns against each other on psychic voyages to bold dimensions anew. 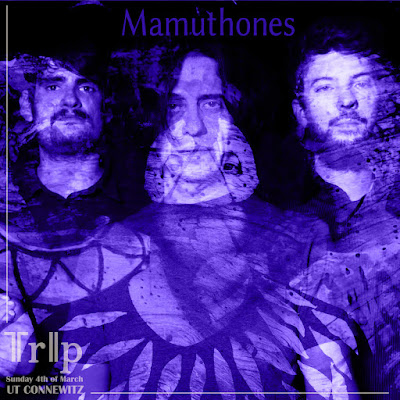