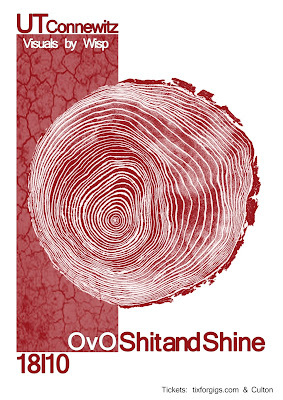 Shit and Shine’s sidestep from percussion led bunny rabbit rock ensemble performance based glee to ultimate heavy fools of the sticky dancefloor remains one of the more inspiring turn around’s in recent years. With highly acclaimed releases on Editions Mego, Diagonal, Riot Season and others Shit & Shine have wasted no time clearing away the rubbish whilst cutting up their own path towards giddy bass heavy shape shifting dance mutations. Snapping the twigs of disco, hurling clouds of exquisite dissonance, mangling modulations, boiling beats, twisting tweaks… this is a crew that will throw anything at the wall, and you.


OvO has always been one of the most active bands in the worldwide noisy rock scene. They have been known pretty much everywhere through their 900 and more gigs, their large amount of releases, including albums, singles, collaborations, tracks on compilations, dvds, and for their original, unique music. They’re a duo, formed by a little possessed singer and guitar player (Stefania Pedretti) and an enormous drummer who plays a mini-set like it was a full metal drum set. Their live performances are legendary, and they’ve played them all over the world, with extensive tours in Europe, North America, Mexico, Asia, including a lot of the main festivals.

"The works of "wisp collective" take on multiple forms, reconstructing architecturally the audiovisual phenomenon through installations, concerts and performances with focus on collaborative realtime systems."