Info for A! Gathering
https://annihilate-gathering.blogspot.de/ 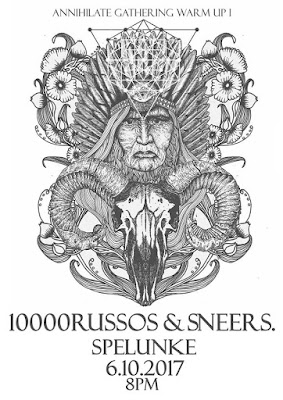 João Pimenta (drums/vocals), Pedro Pestana (guitar) and André Couto (bass), emerged from what they call “a dark, decadent city of a peripheral country in a peripheral continent”: Porto, Portugal. They formed in 2012 and soon released a four track EP, triggering some national buzz and, as many great guitar bands these days, they stumbled upon the international Psych community. They eventually shared stages with the likes of A Place To Bury Strangers and Wooden Shjips and getting signed to Fuzz Club to release their first full length record.

In opposition to most of their peers, 10,000 Russos have concentrated on creating soundscapes of the subconscious. The working environment has been fundamental to the flow of their long, obscure urban jams. Recalling the savage and repetitive progressions of Neu! and the longest and grimmest drones of Suicide, the marching heart-beat in the background gives the music the stomp of a solemn drumming ritual across the wastelands of the mind.

SNEERS. are a two-piece music project formed in Berlin in 2012 by singer-songwriter and guitarist MG Pezzente and drummer Leonardo Oreste Stefenelli.

In 2013 they released their debut album For Our Soul-Uplifting Lights To Shine As Fires followed by numerous gigs between Europe and U.K. With Flames Like Hope To Mortals Given (2016) was announced as the 2nd album and followed by a european tour.

Their music is made of a sound barrier where notes abandon the common harmony and repeat themselves obsessively, in a compulsive way, while the guitar devotionally moans, through noise instincts and melodies for souls. The drums is gloomy and savage, and the voice is sharp and emerges like a neurotic explosion.