Stratocastors(Paris) to play at Akko on April 9th 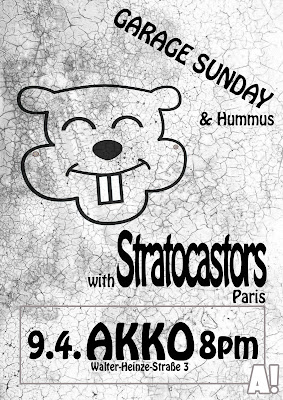 Band Info:
Marius, Danny, Seb and Jerome write songs about their daily lives. Pulling from influences such as, Chacha Guitry, Devo, Der Plan, Plastic Bertrand and Total Control,
Les Stratocastors create a rich world with great depths.
The message is heavy. The songs speak of the lives and observations of four, young, unemployed men living in Paris. Unfortunately for those who don't speak the language of Baudelaire, they sing in French. But those who don't understand can always dance to the music, after all everyone dances. The shows are very energetic with monophonic synthesizers (incredible machines !), a punctual dry guitar roaring with poetic feedback, a bass that makes one think of the Coneheads and drums as insistent and furious as the employment policy of the French government.
Confident (in themselves), les Stratocastors exchange their instruments through out the course of their set. Sometimes, Jerome throws vegetables in the crowd but insists on cleaning up after himself when the show is over which always makes venue management and staff happy !
The group auto-produced two albums, "Demo" and, "Autre Regards", an EP titled, "Sheïtan" and a cassette, "Nuage" out on Black Totem, a parisian-based label. Les Stratocastors have wandered throughout the Shengen zone several times and now feel it is time to taste the pleasures of travel and triangle sandwiches once again. They will be crusading around all of Europe to promote their new album in April !