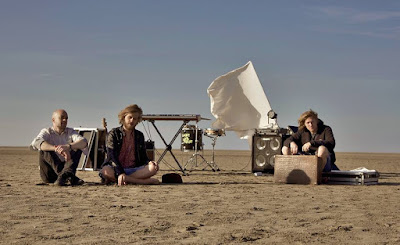 The band does not even imitate itself. That would amount to nothing short of a moratorium, restricting their advancement. When it comes to principles, the principal objective is progression. Their commitment to playing anywhere and everywhere reaches beyond spontaneous concerts on the streets of Berlin. All the world´s a stage. On the back of "Radiate!", their debut album in 2012, Camera extended their range to Russia and the USA. Whilst "Radiate!" was entirely the product of studio improvisation, "Remember I Was Carbon Dioxide" sees Timm Brockmann and drummer Michael Drummer revisit and revise jams supplemented by various different guitarists and other guest musicians, exploring the possibilities of the studio as a reflection loop. Without losing sight of their overriding impulse to improvise – which is, after all, the essence of Camera.
(Bureau B)